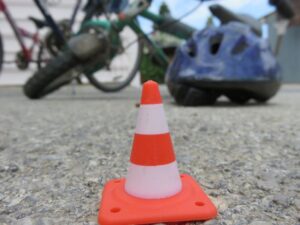 Many people in Wheeling, West Virginia enjoy riding bicycles as a recreational activity as well as an economical and environmentally friendly way to commute. When cyclists share the road with cars and trucks, they’re at risk of serious accidents – accidents that can result in severe injuries, costly medical bills, and pocketbook-draining time missed at work.

If you’ve been hurt in a bike accident in the Wheeling area and someone else is to blame, you could be entitled to seek compensation for your losses. The bicycle accident lawyers at Jividen Law Offices can help you pursue this compensation at no upfront cost to you. Let us help you hold the at-fault driver accountable and fight for the money you deserve while you recuperate from your bicycle accident injuries.

Contact us today to discuss your case with a Wheeling bicycle accident lawyer during a free, no-obligation consultation.

Under §17C-11-2 of the West Virginia Traffic Code, cyclists on state roads have many of the same rights and responsibilities as motorists. However, several other statewide traffic laws apply specifically to bicyclists and to motorists driving near bicyclists. They include:

Other common contributing factors in Wheeling bicycle accidents include defective car or bike parts and poor road conditions. Many cyclists are also injured in dooring accidents, which occur when vehicle occupants open car doors directly into the paths of oncoming cyclists.

If a careless or reckless driver collides with a cyclist in West Virginia, the injured cyclist may have the right to seek compensation from the motorist’s auto insurance policy. Similarly, if some other party behaves negligently in a way that causes a bike accident, an injured cyclist could be entitled to file a claim against that party. A Wheeling injury lawyer at Jividen Law Offices can help you evaluate whether you have a valid personal injury case after a bicycle accident. If so, we can help you hold the at-fault motorist financially accountable for your injuries and related losses.

Injuries as a Result of a Bicycle Accident

Cyclists are extremely vulnerable in the event of a traffic collision. Cyclists may have helmets, but they lack airbags, seat belts, and metal vehicle frames to shield them from the impact of a crash. As a result, many cyclists sustain the following types of serious injuries in Wheeling bicycle accidents:

As a cyclist, you can take steps to reduce the risk of a collision with a motor vehicle. Among the safety precautions to take are to:

What To Do After a Bicycle Accident in Wheeling, WV?

The aftermath of a bicycle accident can be shocking and leave you uncertain about what to do next. However, if you take the following steps, you can protect your rights and improve your chances of pursuing compensation:

What Can You Recover After a Bicycle Accident?

When you file a personal injury lawsuit after a bicycle accident, you are asking to be compensated for the losses you suffered in the accident. Depending on the circumstances, this could include money for:

If you have been hurt in a bicycle accident in Wheeling, WV, let the attorneys of Jividen Law Offices put our 50 years of experience to work on your behalf. Contact our firm today for a free initial case review to learn more about your legal options and how we can help.

How Hard Is It to Prove Medical Malpractice?

Many doctors in West Virginia provide attentive care to their patients. But even good doctors can make mistakes such as failing to order the proper diagnostic tests and as a result cause preventable harm to a patient. Sometimes, doctors commit...